On Sunday morning, we received the very sad news that Warren Snow, our treasured friend and co-Founder of the New Zealand Product Stewardship Council (NZPSC), had passed away.

As Chairperson of the NZPSC, I extend our heartfelt condolences to Warren’s family in this time of immeasurable loss and grief.

Warren was a gentle giant of the international and New Zealand zero waste movement. He was loved and admired by so many New Zealanders, and he was very dear to the NZPSC, which he co-founded in 2015 at a national single-use plastic bag forum held at Massey University.

I met Warren around twenty years ago when he interviewed me for the job of Coordinator of a yet to be established Zero Waste Academy (ZWA). Later, he thoughtfully mentored me, as he did for countless others, in the values and community of learning and activism, in which he was a recognised international expert. So many of us throughout the zero waste community have benefitted from Warren’s immense knowledge, experience and feisty-fun change-making worldview, and have been inspired by his passion, wisdom, staying power and strength of conviction. 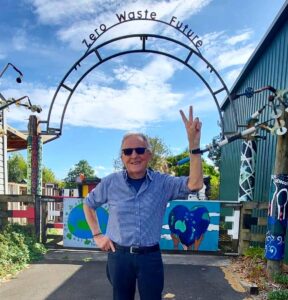 Throughout his life and career, Warren brought together a great many people, communities, organisations and campaigns to address the horrific social and environmental issues associated with waste, and to work towards a zero waste future. Warren’s strategies for building such a future were well-researched, scientifically plausible, beautifully communicated and richly evidence-based. It has been our privilege to witness first-hand Warren’s decades of absolute commitment to the Big Idea of zero waste and to see how he invested his creativity, talent and good character in tenaciously fighting for that just cause.

The NZPSC have tried to do justice to Warren’s qualities and values in our advocacy. Warren set a very high bar. In particular, it has been deeply moving and inspirational to witness how Warren responded to the inevitable push-back and disparaging comments that all genuine change-makers encounter. Lesser people would have given up, or compromised and picked an easier road than calling-out the lobbyist’s tactics of denial, delay and green-washing. Instead, Warren doubled-down on his efforts – with good humour, kindness, wisdom, and amazing campaigns that have fulfilled the role of ‘critic and conscience’ in society, and envisioned and articulated pragmatic strategies for realising the vision of zero waste and a sustainable circular economy.

Arguably, it was in the policy sphere of product stewardship and a beverage container return scheme (for which he advocated tirelessly for decades) that Warren picked his biggest challenge – placing himself up against the might of the packaging industry. In this area, the groups and campaigns that Warren founded, led and inspired, such as The Kiwi Bottle Drive, provided an independent, authoritative, community-centred voice in policy debates otherwise dominated by the lobbying of groups invested in wasteful business models. In this respect, Warren was absolutely fearless in speaking truth to power. His legacy of campaigns and communication on these issues, quite simply stands on the right side of history.

My sense was that corporate lobbying and greenwash rightly offended Warren’s value system and galvanised his determination to be forever part of the solution, rather than part of the problem. Warren’s humanity and value system was rooted in a deep love for people, our local communities and our precious environment. Warren’s values were also grounded in a fierce intellect; he understood that science and economics need not degrade the natural world, and that the right mix of ethics, legislation, policies and programmes can sustain and restore the environment and enhance the communities that depend on those eco-system services.

However, perhaps Warren’s greatest genius has been to quietly gather and inspire thousands of people to experience for themselves – and/or their communities – how simple and effective zero waste practices can be in dramatically reducing waste and our environmental footprint. While campaigning for good government policies and programmes must always be a priority, Warren’s amazing zero waste super-power was knowing that you don’t have to wait for government, or businesses, or others to do the right thing – you can vote with your wallet and your lifestyle-change and make a lasting personal impact.

Like my NZPSC colleagues, I am deeply grateful for having known and worked with Warren. I have benefited greatly from all that he modelled in his life. We now join many others in humbly paying our respects and honouring this wonderful Kiwi battler who made a huge difference through his life.

The NZPSC extends our sincerest condolences to Warren’s family, loved ones and friends, and we thank you for sharing him with the rest of us.

Finally, Warren, thank you and farewell – an inspirational life well led – so many challenges met head-on and so much achieved – a great guy gone too soon – you will be sorely missed! Rest in Peace!!