We are pleased to release our latest report Happy Returns: A proposed model for a Container Deposit Scheme for New Zealand.

This new report explains how bottle deposits could be brought back to New Zealand to deal with the country’s beverage container waste, using an evidence-based model that draws on established overseas experience and New Zealand’s Waste Minimisation Act 2008.

“The model described in Happy Returns is fit for the New Zealand context and would finally put the costs of managing the waste from empty bottles and cans on to the beverage industry instead of councils, ratepayers and the environment” says the report’s author, Warren Snow.

New Zealanders purchase roughly 2.23 billion beverages each year, that’s 6.1 million bottles a day. Yet, only 35-40% are recycled, the rest are either landfilled or littered – the equivalent of 700 Boeing 747 airplanes filled with bottles.

We support a mandatory container deposit scheme as the best way to fix this problem, as do 90% of councils, and 83% of the public.

Through the scheme proposed in Happy Returns, every beverage container up to 3L in capacity would carry a 20c deposit, redeemable at drop-off depots, recycling centres, and even reverse vending machines at supermarkets and shopping malls across New Zealand.

Countries like Australia—where several states have established bottle deposit schemes—prove that such schemes work to decrease littering and increase recycling. For New Zealand, this would mean keeping plastic out of our waterways and oceans, improving bottle-to-bottle glass recycling in parts of the country where this is not happening, and potentially even opening the way for bottle refill systems, like the old-school milk run.

Unfortunately, successive Governments have been dragging their heels about setting up bottle deposits in New Zealand, even though they have had the power to do so for over a decade under the Waste Minimisation Act.

At the end of 2018, The Kiwi Bottle Drive delivered a petition of over 15,000 New Zealanders calling on the Associate Minister for the Environment, Eugenie Sage, to bring back bottle deposits with a target bottle return rate of at least 85%.

“The petition is currently before Parliament’s Environment Select Committee. So now is the perfect time to talk not only about why we need a mandatory container deposit scheme, but also what a potential scheme would look like, and how it could work” says Holly Dove, Coordinator of The Kiwi Bottle Drive.

“Happy Returns shows that it’s 100% possible to set up a container deposit scheme in New Zealand, and that we can do this using existing legislation” says Warren Snow. “The costs are fully accounted for, with only a small contribution necessary from the beverage industry of roughly one cent per bottle. That’s a small price for producers to pay to ensure that their bottles and cans are getting recycled, rather than clogging up our oceans, waterways and landfills.” 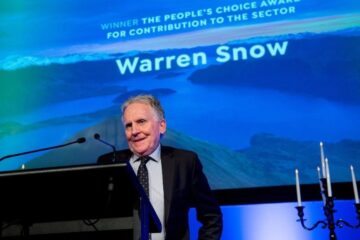